The underwater environment may appear to the human eye as a dull-blue, featureless space. However, a vast landscape of polarization patterns appear when viewed through a camera that is designed to see the world through the eyes of many of the animals that inhabit the water.

University of Illinois researchers in collaboration with other Universities have developed an underwater GPS method by using polarization information collected with a bio-inspired camera mimicking the eyes of the mantis shrimp. The findings, published in Scientific Advances, are the first to demonstrate passive underwater GPS using the polarization properties of underwater light. This technology could open new possibilities for undersea navigation and understanding of the migratory behavior of marine animals.

The camera, a variation of a polarization imager named Mantis Cam after the shrimp that inspired it, takes advantage of how light refracts, or bends, when it passes through the surface of water and bounces from particles and water molecules. 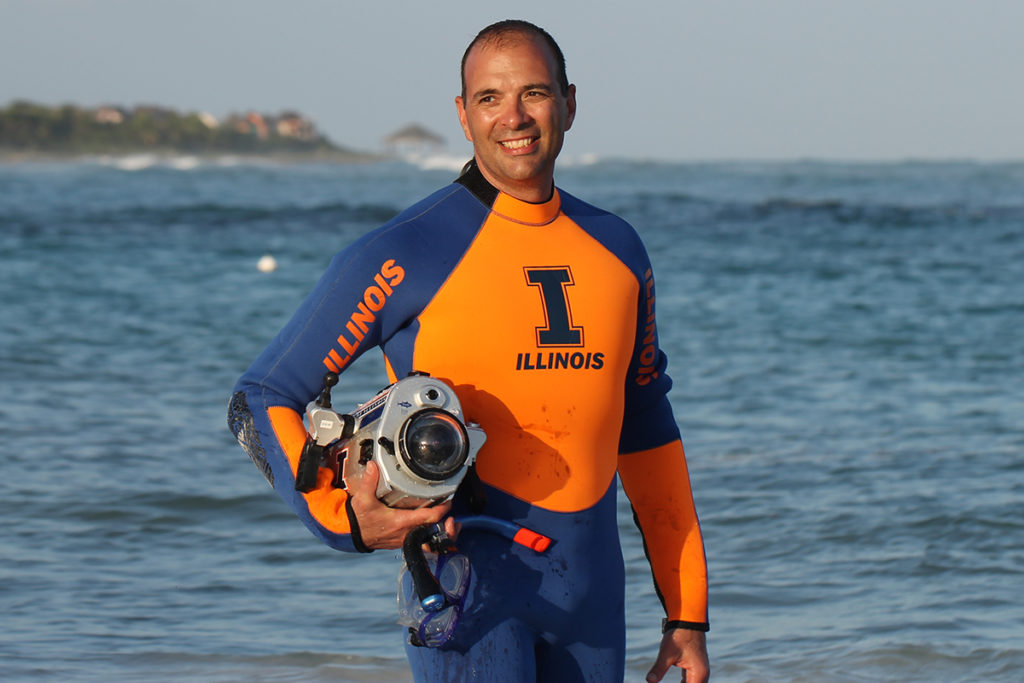 “We collected underwater polarization data from all over the world in our work with marine biologists and noticed that the polarization patterns of the water were constantly changing,” said study leader Viktor Gruev, an Illinois professor of electrical and computer engineering and a professor of the Carle Illinois College of Medicine. “This was in stark contrast to what biologists thought about underwater polarization information. They thought the patterns were a result of a camera malfunction, but we were pretty sure of our technology, so I knew this phenomenon warranted further investigation.”

After returning to the lab, Gruev and graduate student and co-author Samuel Powell determined that the underwater polarization patterns are a result of the sun’s position relative to the location where the recordings were collected. They found they can use the underwater polarization patterns to estimate the sun’s heading and elevation angle, allowing them to figure out their GPS coordinates by knowing the date and time of the filming.

“We tested our underwater GPS method by pairing our bio-inspired camera with an electronic compass and tilt sensor to measure the underwater polarization data at a variety of sites around the globe, depths, wind conditions and times of day,” said Gruev, who also is affiliated with the Beckman Institute for Advanced Science and Technology at the University of Illinois. “We found that we can locate our position on the planet within an accuracy of 61 km.”

This technology may open up new ways for people and robots to better navigate underwater using visual cues from polarized light. “We could use our underwater GPS method to help locate missing aircraft, or even create a detailed map of the seafloor,” Powell said. “Robots swarms equipped with our sensors could provide a low-cost means of underwater remote sensing – it would certainly be more cost-effective than current methods.”

This research could also lead to new insights into the migratory behavior of many marine species.

“Animals like turtles and eels, for example, probably use a slew of sensors to navigate their annual migration routes that take them thousands of miles across oceans,” Gruev said. “Those sensors may include a combination of magnetic, olfactory and possibly – as our research suggests – visual cues based on polarization information.”

Another aspect of this technology is its potential to help researchers understand how pollution may alter the migratory paths of animals sensitive to polarized light.

“It is very likely that increased pollutants in the air and water alter underwater polarization patterns, causing the undersea environment to appear different from what many animals have learned,” Gruev said. “Our underwater GPS method may provide insights into how some long-distance migratory animals, such as whales, might get confused and end up in the wrong places.”

For example, more whales are becoming stranded close to the California shore, where they have never been observed before, Gruev said. “Perhaps pollutions is the indirect culprit for this reason, as it affects the underwater polarization patterns necessary for migratory behavior.”

The National Science Foundation and the Air Force Office of Scientific Research supported this study. Gruev also directs the Biosensors Lab at Illinois.

You can read more about it here:

No category
vgruev@illinois.edu
Comments are closed

View all posts by: vgruev@illinois.edu